Flights and ferries cancelled as fog takes over Sydney

A thick blanket of fog has caused havoc with Sydney’s transport, cancelling ferries and delaying flights.

Ferries on the harbour and along Parramatta River were cancelled for several hours. It came at the same time as Manly Fast Ferry workers went on strike.

At Sydney airport, dozens of domestic flights were delayed and cancelled leaving some travellers more than three and a half hours behind schedule.

A nationwide system outage for Jetstar only made matters worse with hundreds of people unable to check in.

The issue has now been resolved… but airlines are still working through delays.

Services in and out of Sydney may be delayed due to fog. We are working to have guests on their way as soon as possible. To keep an eye on the status of your flight, click here: https://t.co/m479B0nZMc

Conditions on major motorways weren’t any better with visibility significantly reduced on the M4 and the M1.

We’ve got a foggy start to the morning.

There are low visibility warnings on the M4 and M1 motorways.

How is it where you are? pic.twitter.com/7PRquCsNyH

Macquarie National News reporter Josh Byrant snapped these photos of the Sydney Harbour Bridge beginning to appear from the mist.

“What a difference 30 minutes makes!” 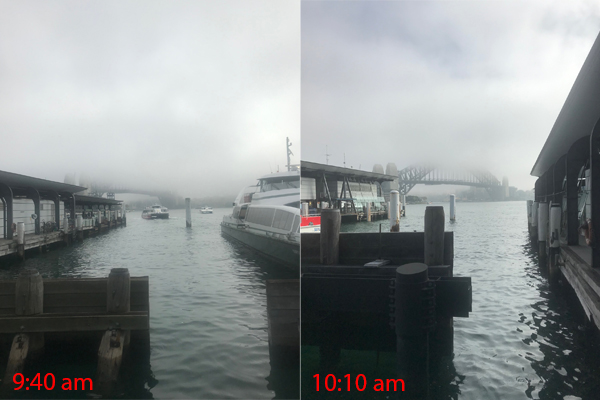 Reporter Loren Howarth took this video of the ANZAC Bridge covered in fog.