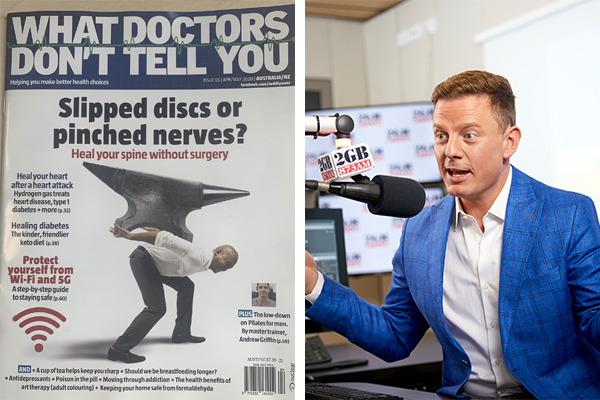 Australia’s two largest supermarkets have agreed to stop selling an anti-vaccination alternative medicine magazine at their checkouts and in their aisles, after being called out by Ben Fordham.

The magazine ‘What Doctors Don’t Tell You’ is stacked page-to-page with conspiracies, dangerous misinformation and dodgy medical advice.

On the front page, hydrogen gas is advocated as a heart disease treatment, and it warns of dangers associated with 5G and Wi-Fi networks.

Hey ⁦@woolworths⁩ and @Coles why are you stocking a magazine produced by lunatics who link vaccines to autism and downplay the dangers of coronavirus ? We’ll be chatting ⁦@whereisdaz⁩ about this shortly on ⁦@BenFordhamLive⁩ and request they be removed ASAP. pic.twitter.com/fWHCFYX3Ls

“What is Coles and Woolies doing, allowing these nutcases to spread this dangerous stuff at their checkouts?” Ben Fordham commented.

UNSW Associate Professor of Medical Science Dr Darren Saunders discovered the magazine on a shopping trip, and told Ben he couldn’t believe what he was seeing.

“There’s a reason doctors don’t tell you the stuff that’s in here, and that’s because a lot of it’s dangerous,” he said, describing such publications as a “gateway drug” to even more harmful conspiracies.

“These kinds of magazines, there’s a trick to them.

“There’s little bits of science, science-y sounding words, and they use that as a hook to draw you into all of the conspiracy stuff and dangerous advice.”

Dr Saunders said it’s “nuts” to be promoting such claims, especially during a pandemic, and called on the supermarkets to take action.

“I like to think Coles and Woolies have a higher standard when it comes to protecting the health of their customers.

“It would be nice to see them act responsibly … and remove this stuff from sale.”

Despite initially defending their decision to stock the magazine, following the interview Coles committed to removing it from all stores nationwide. (see full statement below)

Woolworths has since followed suit, informing their supplier they’ll be removing the magazine from sale, but say “the decision to stock a magazine doesn’t mean we endorse the editorial views it holds”. (see full statement below)

Ben commended both supermarkets for “responding so strongly and so quickly”.

We appreciate our customers’ concerns.

We’ve informed the supplier we’ll be removing the magazine from sale.

As always, we would encourage our customers to seek and follow expert medical advice.

Coles does not endorse the content of this magazine.

What Coles was shown when they were originally shown the magazine, was different content to what is in this edition.

Coles is removing it from all our stores nationwide.

We encourage everyone to listen to health authorities on COVID-19.