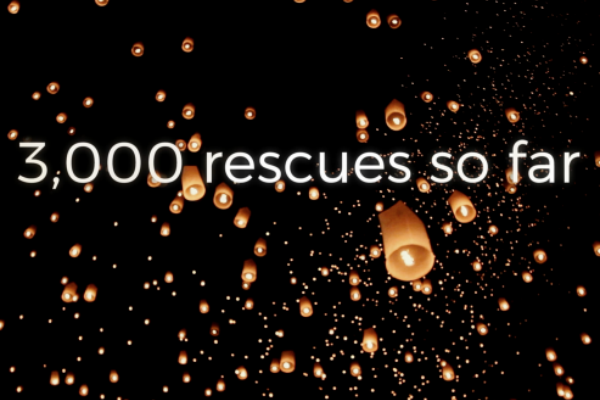 Three thousand. It’s a milestone. A reason to rejoice.

Destiny Rescue is celebrating the rescue of its 3000th trafficking survivor from the sex trade.

A raid on a brothel in the Philippines in early July rescued 26 victims of human trafficking – taking the total number of survivors rescued to 3006 – an impressive number of lives saved since Destiny Rescue began keeping records in 2011.

“This is a momentous occasion; a real milestone for our organisation,” says Founder and International President Tony Kirwan. “We have been relentless in pursuing freedom for children for over 16 years now, and to reach this number is encouraging, not just for us, but for every single individual we have helped along the way.”

Destiny Rescue has operations in Thailand, Cambodia, India, the Philippines, Dominican Republic and an undisclosed location in Southeast Asia. It began rescuing children from the sex trade in 2006.

“The beginning was a steep learning curve as we endeavoured to navigate the trafficking world where children were being sold by the hour,” Mr Kirwan says. “I remember the first six months of attempting rescues we had a 100 per cent failure rate, yet we were undeterred in our pursuit to rescue these children. It wasn’t long until we started to get traction, kicking goals and learning from our mistakes along the way. It wasn’t always perfect but we knew we had the makings of a great formula for bringing children to complete freedom, and we’re seeing the fruit of that now.”

“While we celebrate reaching our 3000th rescue, it’s important to remember that the figure represents 3000 individuals,” Mr Kirwan says. “That’s 3000 daughters and sons, 3000 sisters and brothers – 3000 individuals who have inherent dignity, infinite worth and are entitled to their freedom. Let’s not forget we are talking about human beings, not numbers.

“But since we are celebrating this milestone, the number is important. Yes, I am all about the number, a huge all-encompassing number; we want the number rescued to equal the number of those children enslaved. We are in this to end it, not just to skirt around the edges”.

Most of the 3000 rescues have come through Destiny’s undercover operations. Rescue agents posing as customers enter bars and brothels, gain the trust of children being sold, then offer them a way out when the time is right. The remainder have come through rescue/raid operations in collaboration with anti-trafficking police.

Survivors are rehabilitated in Destiny Rescue’s care, or with partner organisations, and given education and training to enable them to find sustainable employment upon reintegration.