15 activists have been charged after abseiling off the Sydney Harbour Bridge this morning.

The protest began at about 5.15am, with security staff able to detain several of the protestors.

Several others managed to climb over the edge and rappel under the main deck of the bridge.

There were five women among the group, with the eldest of the 10 men arrested being 70 years-old.

They were all conditionally bailed, charged with climbing the bridge and willfully preventing the free passage of a person/vessel.

Greenpeace has released a statement claiming responsibility for the illegal demonstration.

Specialist trained climbers have abseiled from the iconic structure. The protestors are joined on the ground by Australians from across the country who have had their lives turned upside down by the impacts of climate change.”

One lane of traffic was temporarily closed but re-opened shortly afterwards as the abseilers hung from the bridge holding signs that read “100% renewables”.

NSW Police Assistant Commissioner Mark Walton tells Ben Fordham he does not condone activism that puts others in danger.

“It’s very disappointing that people took their interests ahead of the safety of many.

“The security on the bridge did respond very quickly but with the volume of people that were there… they prevented quick access.”

As the protest continued above, Greenpeace held a media conference on the ground, repeating the calls for Prime Minister Scott Morrison to declare a climate emergency. 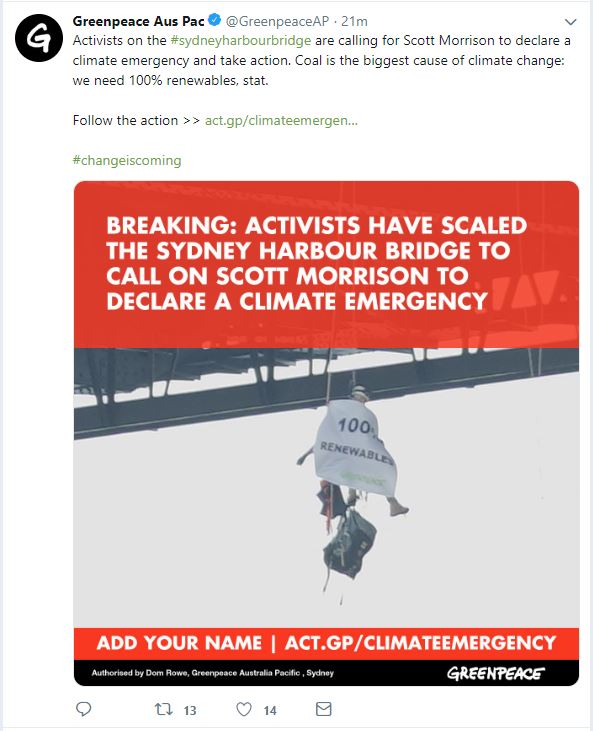 The environmental activist group has been providing live coverage of the protest, releasing footage and images.