Global superstar Celine Dion has caught up with her old friend Alan Jones, days after returning to the top of the US album charts.

Her new album Courage is her first number one in 17 years, the longest ever gap for a female performer.

Celine took some time out in the middle of her world tour to have a chat with Alan, who she’s known for years.

But, she had a bone to pick with the Breakfast host, wanting to know why he hasn’t joined her on the tour yet.

“Alan, I miss you. First of all, how come we’re so far apart from each other now? That’s not fair. 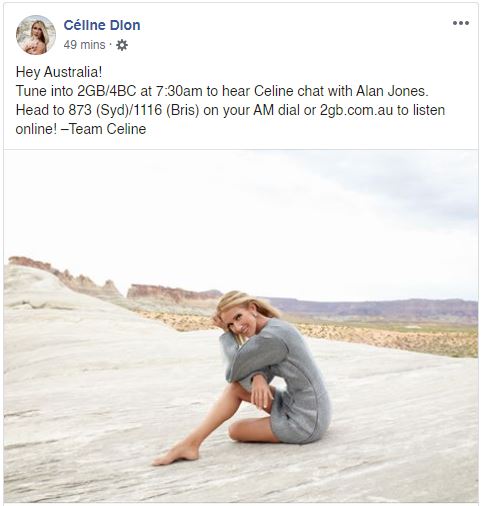 In an extended chat, Alan found out Celine loves another Australian.

The French-Canadian singer explains how she idolised John Farnham growing up.

“I’m the 14th child of a huge family. My parents and all my siblings… they were my first inspiration, whatever they were listening to.

“From Janis Joplin to Stevie Wonder to Creedance… John Farnham for example.

“Oh my God, I just love him so much. When I went to Australia last time I met with him and it was a dream come true.

“He sang the song [You’re The Voice] with me that night. I will never forget that.”

WIN A TRIP TO SEE CELINE DION LIVE IN THE USA: