A woman is in a critical condition after a semi-trailer flipped onto a car in Sydney’s south-west.

There are reports the 31-year-old woman was thrown from a car when the truck flipped on Henry Lawson Drive in Milperra.

Emergency services were called to the scene around 11am following reports of a crash involving two trucks and a Hyundai sedan.

The woman was taken to Liverpool Hospital in a critical but stable condition. 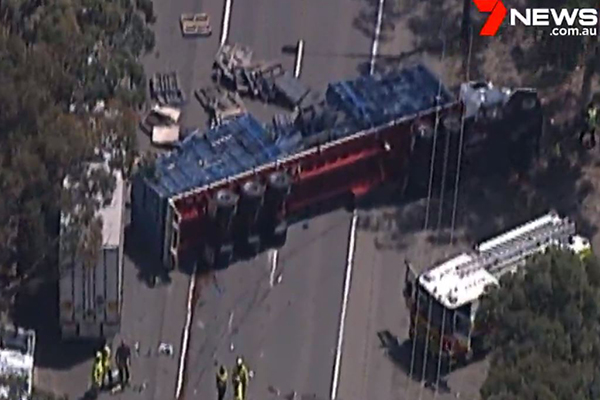 All northbound and southbound lanes have been closed to traffic.

MILPERRA: Henry Lawson Dr remains closed in both directions due to a truck & car crash near Fromelles Ave. Southbound traffic can divert via Newbridge Rd, Northbound can use Poziers Ave. The northbound diversion is only suitable for light vehicles and small trucks. Expect delays. pic.twitter.com/vahffP7ONq

Detective superintendent Murray Reynolds tells Deborah Knight they are investigating the cause of the incident.

“You need to be very careful where heavy vehicles are involved, you need to give them room.”

Caller Leon drove past the scene and tells Ray Hadley the small car is “squashed like a harmonica”.

“The car is virtually flattened, almost to the road… it’s just a terrible set of circumstances.”