Both drivers are lucky to be alive

Anthony sent in these images of an accident on Cattai Ridge Road at Glenorie yesterday afternoon.

Police crews were called to the scene after reports of a two-car crash at 4.30pm yesterday.

The driver of the Mazda 3, a 21-year-old man suffered possible neck injuries, while the driver of the other vehicle, a 56-year-old woman, was trapped for a short amount of time before being released.

Both drivers were taken to hospital Westmead hospital in a stable condition.

There are suggestions from those on the scene that the use of a mobile phone may have played a role in the accident. 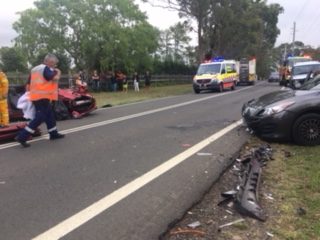