Brooke – one-third of the star group The McClymonts – and her husband Adam – of the Adam Eckersley Band – teamed up for the first time last year on a new album, Adam and Brooke.

Between them they have 12 Golden Guitars, two ARIA Awards and two APRAs. 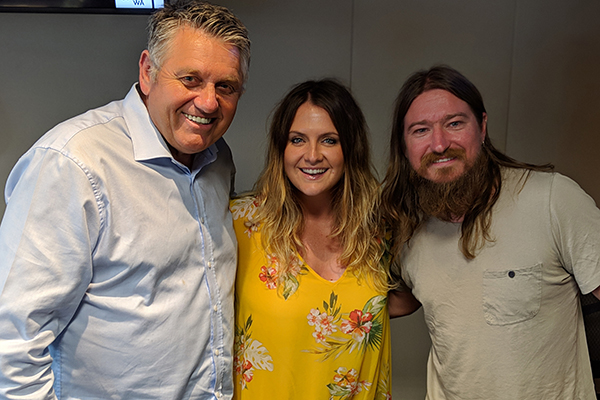 The couple have been invited to play at a country music festival in England, after they were spotted performing in Tamworth.

They tell Ray their new tour is focusing on regional NSW.

“We know that a lot of people out there don’t get a lot of entertainment so we thought, lets go to them,” Brooke says.

They performed an emotional version of their third single Nothing Left to Win, leaving Ray intrigued about the story behind it.

Brooke and Adam tell Ray they’ll soon be moving to the bush, heading to the tiny town of Wang Wauk on the NSW Mid North Coast.

It sparked a bizarre call from a listener, James, who grew up in the area.

After a hilarious exchange, Brooke figured out they’re moving three blocks down from James’ parents.

She even invited him along for the house warming…

“When we get our house built, and we’re gonna have a big house warming, you’ll have to come along.”

In studio with Ray Hadley