Ben Fordham has called out bizarre images that have emerged from the Australian Museum.

Photos from the Nights at the Museum event held on April 14 show a man in ladies’ underwear sitting with a group of children building Lego blocks.

The woman who took the images said, “You let a male in fetish gear play in the kids lego pit during the school holidays. When I spoke to security they said they could do nothing and pointed me to the organiser. He’s sitting there with his full package out. Disgusting!!”

After a complaint was made the Museum investigated and said in a statement: “The individuals in fancy dress were keeping to themselves and had not done anything wrong.” (See full statement below) 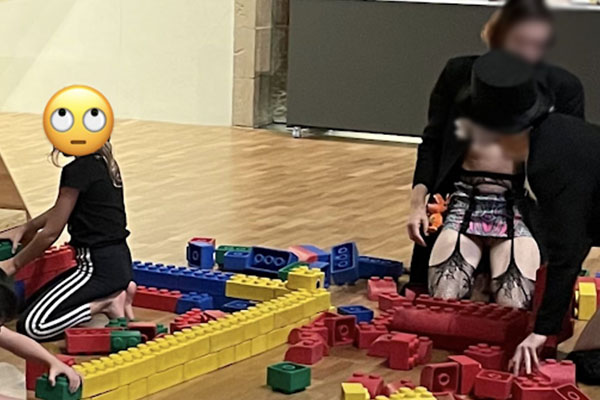 “I think they might need to think about how this works the next time around,” Ben said.

“The Australian Museum is committed to being a safe place where everyone feels welcome. The images shared on Twitter by Sydney Radfem on Tuesday 3 May 2022 were taken around 8PM during a Nights at the Museum event held on Thursday 14 April 2022.

“Multiple members of our security and programming teams spoke with the woman who took the images on the evening following the concerns she raised regarding two people wearing fancy dress.

“The teams investigated and confirmed that the individuals in fancy dress were keeping to themselves and had not done anything wrong.

“We feel this was fully addressed by the Australian Museum on the night of the event and will not be engaging with the thread Sydney Radfem has started about this on Twitter nearly three weeks later.”