An icy chill has swept across some parts of New South Wales.

Snow has fallen in the state’s central west and alpine regions after a cold snap hit overnight.

In Sydney, the mercury dropped below four degrees at Campbelltown earlier this morning and 10 degrees in the city, with temperatures expected to reach just 17 degrees.

A severe weather warning for damaging winds is in place for regions including the Illawarra and South Coast.

Paramedics are already responding to incidents due to the snowfall.

BREAKING | Paramedics are responding to an accident near Orange following heavy snowfall across the state.

Two adults and a 4yo child are reportedly trapped inside a car after the vehicle slipped off the road.

It’s believed the two adults and a four-year-old child have left their car.

Five paramedics responded to the incident Lidster where the vehicle was lodged in a ditch, but the car was empty.

In the central west, there’s a dusting of snow at Oberon, and it’s a white start to the day in the Snowy Mountains, where up to 60 centimetres is expected over the weekend.

Emily sent Ray Hadley this photo from just outside Rockley in the Central Tablelands.

“Only traffic is the wildlife who don’t seem to know the road rules!” she writes.

See the photo below 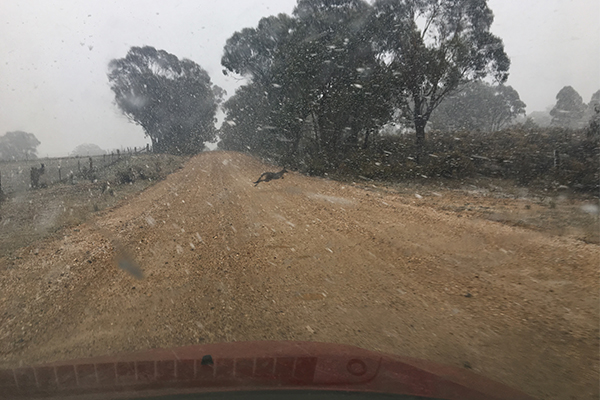