Win Cash with Pass the Bucks! 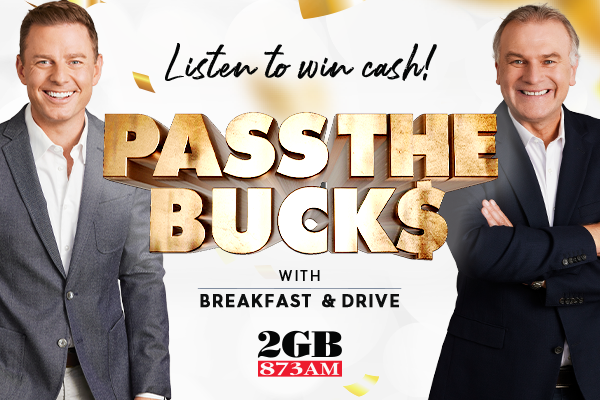 2GB’s Ben Fordham and Jim Wilson are giving you the chance to win cash again – with Pass the Bucks!

From Monday May 3 until Friday May 21, you’ll have the chance to win $1,000 cash twice every weekday!

Just listen to Ben Fordham Live for breakfast on 2GB to hear a special codeword.

Then, later that day, sometime during 2GB Drive with Jim Wilson, you’ll be asked to call in, if you know the codeword.

If you’re the nominated caller to get through – and you know the correct codeword – you’ll win $1,000 cash.

If the caller doesn’t know the codeword – we’ll keep taking calls until we get a winner!

Jim will then announce another codeword – that will be asked for by Ben Fordham in 2GB breakfast the next weekday morning.

Be listening, make a note of the codewords,  and you’ll have another chance to win $1,000.

There’s thousands of dollars in cash to be won.

We’re playing “Pass the Bucks” from Breakfast to Drive.

So keep listening, and you could be a big cash winner with 2GB.